You are here: Home / Economics / A US Recession or Not – Outlook and Friday’s NFPs 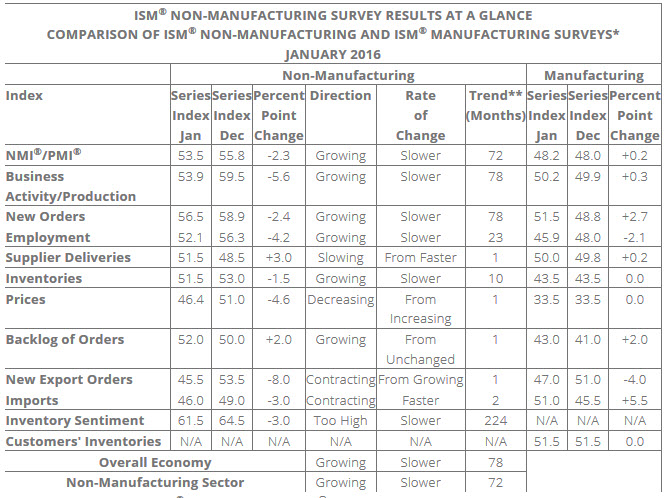 An upcoming recession in the US is on everybody’s mind (at least that’s what Google Trends shows):

And with that bad news for the rest of us.

To put that chart into context the last official recession according to the NBER was between December 2007 and June 2009. And the average duration between recessions since World War II has been five years, with the longest period being 10 years: between 1991 and 2001.

So is it going to happen soon? Probably yes. And most likely by 2018.

In this article we’ll provide an overview of the current evidence, and then look to answer the question: what’s the best way to trade this?

What do the fundamentals show?

For starters a recession is defined as two consecutive quarters of negative GDP growth. So let’s define GDP:

where the percentages in brackets indicate the contribution to US GDP.

Let’s figure out what the Consumer and the Business Components currently show us.

The Business Side of the GDP Equation

On the business side, the Markit Manufacturing PMI has been steadily declining since its high of 58, in 2014, to a current reading of 52.4, with a note on the slowing of job creation, due to manufacturer’s heightened uncertainty about the economic outlook. The ISM’s manufacturing PMI has gone down the drain as well with a current reading of 48 indicating a contraction.

Also, Industrial Production has fallen off a cliff with regular decreases in monthly growth since 2014.

So from a business perspective GDP growth is at a tipping point, probably leaning more to tipping over at present.

What About the Consumer Part of the GDP Equation?

Consumer confidence has come off the 100 level in early 2015 and is now hovering at 92.

Retail Sales also decreased in a straight line down since 2011 and are currently at pre-2008 recession levels.

Building permits have also started to gyrate wildly, rather than the smooth climb they experienced post the GFC. These permits are important as they indicate bullish / bearishness of developers. And if houses aren’t built developers don’t expect prices to go up. This has an impact on the wealth effect of housing on the consumer. In line with this the Shiller house price index has flat-lined for the last six months.

Verdict: recession likely in the next 12 months.

What are the markets saying? – Equities

Two pieces of market lore get taken into consideration to anticipate upcoming recessions. The first comes from the stock market and the second from the yield curve.

The stock market picture is not too rosy:

with a bear correction averted on the 15th Jan.

Unfortunately, as Paul Samuelson quipped, the Stock Market predicted 9 of the last 5 recession. The primary reason is that the relation between stock growth and GDP growth isn’t that strong statistically.

On the other hand we have only had two bear market corrections (over 20% decline) without a recession since 1990. So as long as the S&P500 stays above 1704, we should be fine.

What are the markets saying? – Interest Rates

The second piece of market lore is the 10Y – 3M interest rate spread, going back to a paper by Reuben Kessel at the NBER in 1965. The idea goes that with a flat or inverted yield curve, inflation and growth outlooks are low, and so might be a good indication of an upcoming recession. Usually the outlook is over a 12 month period.

Here is the current chart:

So from the Market’s perspective it is still a wait-and-see game. Given the S&P 500 is below its 200-day moving average we’ll have some fighting to get through to the other side.

What do the Banks tell us?

Alan Ruskin at DB states that the ISM Index in the US has fallen more than any other country’s in the last year.

On the other hand Aneta Markowska of Soc Gen puts the probability of recession at 3% n December, with a downturn in 2018 (10 years after the previous one, and the longest distance between cycles experienced to-date!)

The banks are equally divided on the outlook, but recession is definitely seen on the cards over the next one to two years.

Short term outlook for USD and the upcoming NFPs on Friday, 5th February

The fundamentals are clearly deteriorating, though the markets are not quite yet convinced. Furthermore the GDP numbers are lagging indicators. We won’t know we’ve hit a recession until we are usually out the other side.

Summarizing: we definitely will hit a recession in the next 12 to 24 months. That much is certain.

So what to do in the meantime? The current uncertainty is not just on the minds of investors, but also on the Fed officials’ minds, as evidenced by Dudley’s comments on Wednesday (sending the dollar on its first leg of its tailspin for the day).

This indicates that policy decisions aren’t presently fully priced in by the markets, and according to the Fed’s own admissions future policy will hinge crucially on upcoming economic data.

The first such piece of data will be the NFPs on the 5th February. Given the dollar unwind we’ve started to experience the question is how much can it continue to the downside?

It is interesting to note that the ECB meetings since December, as well as the surprise liquidity injection by the BoJ and the rate rise by the Fed in January, have only led to a dollar sell-off to-date. The dollar wants to be sold. As always, buy the rumour, sell-the fact. And dollar hogs have had enough after one and a half years of buying in anticipation of a Fed hiking cycle.  Time to dump the inventory.

If the NFPs come in disappointingly on Friday, there won’t be much for it, and whatever hiking cycle the Fed advertised will go out the window.  EURUSD will continue to rally to its upper boundary of 1.15, and USDJPY could drop below 116.

As always trade after the news and let the markets tell you which way they want to go!

Most people are familiar with the term ORB (open range breakout). It was popularized by Toby Crabel’s book “Day Trading with Short Term Price Patterns and Opening Range Breakout”, as well as the The Logical Trader: Applying a Method to the Madness (Wiley Trading) by Mark Fisher. ORB uses the price range set at the start of a trading period to determine the future price moves, using a breakout-style approach. In this article we’re going to apply this principle to the FX market using a who… END_OF_DOCUMENT_TOKEN_TO_BE_REPLACED

How to Trade the Start of the Year: Guide to Stress-Free Positioning
END_OF_DOCUMENT_TOKEN_TO_BE_REPLACED

Kelly betting is an optimal approach to allocating capital to your system. In this article I want to show you how to apply this approach to your trading, and more importantly what kind of interesting questions you can answer using the ideas behind Kelly betting, in particular: “How long does it take to double my money?” First let’s start out with a simple example and progress to actual markets and trading systems. The example is as follows, and tends to be an interview question for a… END_OF_DOCUMENT_TOKEN_TO_BE_REPLACED

Kelly - What Is It and How to Use It
END_OF_DOCUMENT_TOKEN_TO_BE_REPLACED

Market timing refers to the fact that by judiciously choosing entry and exit methods in a given market you can out-perform buy-and-hold. The first question of course is why you should buy-and-hold in the first place. The idea stems from the equity markets.  Historically they have risen.  The famous chart of course is the S&P 500 over the last 65 years: So why should this happen? Economic reasoning is behind this argument.  Long term macro and micro economic gro… END_OF_DOCUMENT_TOKEN_TO_BE_REPLACED

In this second part of the Mean-Reversion in Equities series we’ll cover the reasons behind why mean reversion works in various market regimes. In the previous article we combined the idea of looking at two consecutive down-days combined with buying the S&P 500 while it was below its five day moving average. A question that stands out: why does it work so well?  And, will it ever stop? The answer to this question lies at the heart of developing good trading strategies.

High Frequency trading has become both the poster-boy and the scapegoat over the last couple of years in trading circles. It’s been seen as a sure-fire way of making money, as well as a sneaky way the flash-boys tax all the other participants in the market. In this article I want to cover some of the basics of High-Frequency Trading, as well as how it applies to trading from your “Living Room.” An example of such trading from your own private realm is the following P&L chart showing profits i… END_OF_DOCUMENT_TOKEN_TO_BE_REPLACED

Of all things on this planet?!  Aren’t they boring?  Not explosive enough?  Isn’t this stuff what old people invest in?  Also, aren’t they supposed to start to sell-off?  And how do you get your hands on these over the counter instruments. In the first article of this series on Creating Profitable Trading Strategies  we started with the premise that you need to look at assets and their underlying biases. We covered equities.  They’re exciting.  Buffett makes 19.1% a year on them.  An… END_OF_DOCUMENT_TOKEN_TO_BE_REPLACED