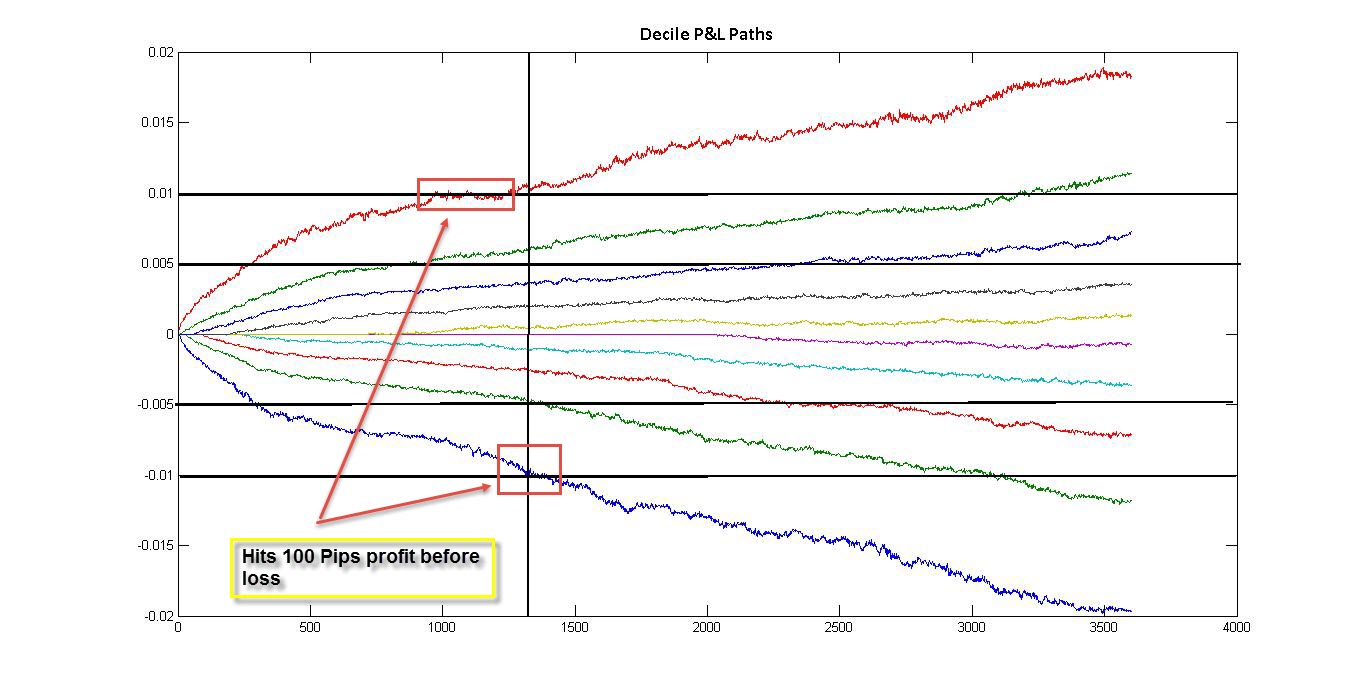 Many people ask if there are any particular technical setups that I like to look at and what the best way to trade them is. My all-time favorite heavily involves Support and Resistance levels, and using these as breakout levels. The art lies in finding them and then managing trades appropriately.

In this article we’ll focus on using Bullish and Bearish Engulfing Bars to identify support and resistance levels, and present the analysis that goes behind implementing such a system. Implementation also requires understanding the Exits of the system, not just the entry, so we look at how to determine these factors.

As you’ll find, nothing beats having rules, and being able to historically test them inside-out.

In conclusion Bullish and Bearish Engulfing Bars turn out to be very good signal providers, and should be part of anyone’s armory.

First-off let’s define what these bars are. The first time I encountered them was anecdotally from people trading the 4-Hourly time frame.

So we can introduce the idea of a rolling bearish or bullish engulfing candle.

If we look at the hourly time frame and bunch groups of four candles together we can compare the current group of four to the previous group of four on a rolling basis. Here’s a diagram to make it clearer. In this case the diagram shows a Bullish Engulfing 4-hourly group of candles:

Using this approach removes both the arbitrariness of the four-hourly cut-off (assuming that hourly bars are somehow more fundamental), and increases the number of signals we generate (since there are more bars).

Rolling means that after a new hourly candle is generated we add this one to the beginning and drop the last one at the back of our group of hourly bars, and repeat the analysis above.

The usual approach is to trade in the direction of the engulfing candle. So the upper breakout level is set by the high of the current four-hourly group of candles, as in the graphic above.

Similarly for a bearish engulfing four-hourly group the breakout level is the low of the current group of four bars on the hourly time frame.

As is usual, once price breaks out you trade in that direction.

So how does such a trade perform?

For the purpose of this article, we will look at EURUSD (for the usual reasons: liquid, tight bid ask spread, and everybody’s in it!). I’m using minutely data going back to Jan 2010 as sourced from ForexTester (which you can find on the Resources page), to determine the trade’s performance.

Let’s look at an idealized trade:

Admittedly I took the first best one out of the data and it just so turned out to be a super trade!

As with any trade that you enter, you need:

We’ll ignore (3) for the time being and look at (1) and (2). The best way to figure out where to put the SL and TP levels is to look at all such instances where we were signalled a trade and look at the average path of EURUSD price following a breakout.

For the long trades triggered by a break to the upside, above the high of the 4-hourly bullish engulfing candle, the average path after the breakout is:

This chart shows 3,600 minutes from the end of the Bullish Engulfing Candle. The plot is actually

So in essence we are saying that the sweet spot, if a trade gets triggered is to hold it for 1000 minutes, which is roughly one day.

An interesting question is to see how long after the Bullish Engulfing Candle gets formed it takes for price to break out to the upside occurs. Since times are obviously positive, it makes more sense to look at the median of times, rather than their average. Here is a frequency plot of breakout times:

With the median time being 67 minutes.

If you’ve kept with me so far, the first thing to have struck you hard by now is that the average path in the chart above is positive right through the first day and a half!

The second thing to notice is the pip scale on that chart. We’re talking average profits of 6 pips at the peak.

Ok, the next step is to look at paths in more detail. We split the average path into 10 sections from worst to best, and average the paths for each section. This is called splitting the paths up into deciles.

Looking at the most extreme Profit and Loss paths, you see that the stop loss of 100 pips is reached before the 100 pip take/profit. The point at which this happens is also the sweet spot for the average path.

In essence we’ve set ourselves up for following strategy on the long side:

What about the short side?

We can repeat the same exercise of looking at the average paths to the short side. Note, that to generate this chart we have plotted

which is the P&L of taking the short position. So though we expect the price to go down, we would want to see the average P&L curve to slope up:

The average path is even better. The first sweet spot is at the same time as for the upward breakout on a bullish engulfing calendar. But we see that the trend continues for longer. Of course that strongly relates to the downtrend in EURUSD since 2010, which the start of our testing data.

With that in mind we can discard holding periods post one day.

Now for the P&L path deciles to determine where we can put our stops and take profits:

A 100 pip stop-loss seems even better placed, as it gives the trade much more time to move and capture profit. Again this is in part due to the downward bias in the data over which we are testing.

So for the short side we can implement similar rules:

However, nothing says it better than a cumulative P&L chart. In the next article, Part II, we’ll look at historical backtests to see what the actual performance looks like, given the above analysis.

Part III will look at what happens if you take the reverse of this trade. That is shorting the low of a bullish engulfing candle and buying the high of a bearish engulfing candle. This is a variant on Linda Rashke’s Turtle Soup and at first glance seems to provide even bigger profit potential.