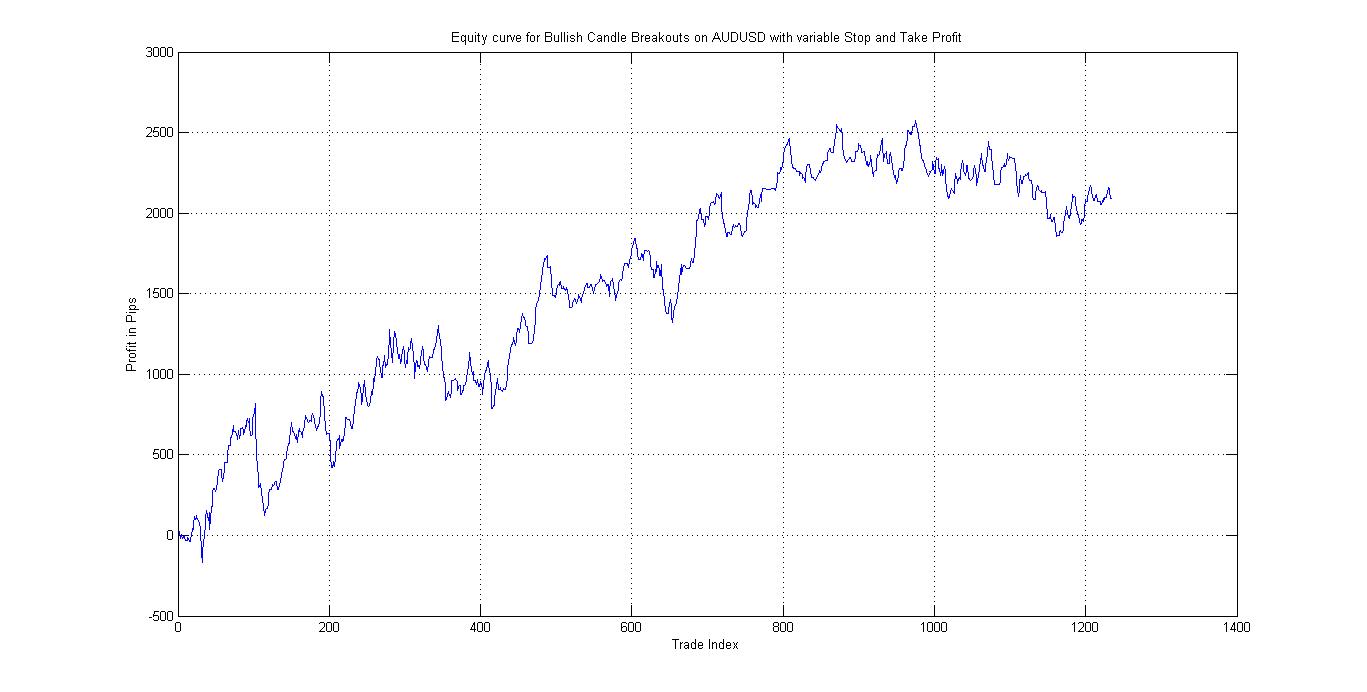 This is the second article in the series of trading the Bullish and Bearish Engulfing candle stick patterns. Following on from Part I, we will actually perform some backtests using the results we found in Part I.

In Part I, we split up the analysis for long and short trades separately. Here we will keep to this approach. The justification is that there need be no symmetry between the long & short approach. This is especially true for equity systems, where bear markets have distinct dynamics from equity bull markets. You could argue that for G10 currency pairs the returns are more symmetric (as evidenced for instance in the fact that volatilities exhibit more of a smile rather than a skew for G10 currency pairs). However, you should always keep an open mind!

So let’s recap the results for:

So let’s see what happens if we apply these trading rules:

The data used to backtest this system on ranges from 1st Jan, 2010, to end of 2015. The outcome: great performance for the first 400 trades, and then it goes sideways. This happens as of Aug 2011. It started producing returns again as of end of 2013.

Why? (One of the most important parts of building a system is to understand which market forces affect the system. This allows one to construct something that is flexible and adaptable, and gives you the understanding to know when it will stop working!)

The first guess is that it might have something to do with volatility; that is the size of daily swings in the EURUSD market. This guess is driven by the fact that we are trading a breakout system, and so it needs movement in the market to make money.

Plotting out EURUSD against its 21-Day ATR (Average True Range, which is a measure of average daily EURUSD moves in pips) gives:

As we see the decrease in volatility corresponds to under-performance of the system.

So the next step is to ask, how we can improve it. The first suggestion is to make the stop-loss adaptive rather than fixed at 100 pips.

But if we’re introducing an adaptive stop, it might make sense to think about take-profits as well. We will keep the running of the setup to 12 hours. That means that from the time of putting the breakout order on, until we either cancel the order (because it wasn’t triggered), or close it out because neither the SL nor TP was hit, is 12 hours.

For the purposes of illustration we will set the stop at twice the height of the engulfing candle, and the take profit at half the height (I know, I know, let your profits run, but I’m greedy).

So what does the new set up do?

As I pointed out in a recent presentation at the London Forex Show, fiddling with the original signal via stops or take-profits, rarely will significantly increase profits.

And yet, if you have been following this far, the first thing that should hop out at you: the overall structure of the P&L curve is different. It’s “smoother”, in the sense of lower drawdowns, with smaller swings on a daily basis. In essence we have introduced control on the downside.

One good check to see if an approach like this is stable is to look at other currency pairs. One would hope that the property we are exploiting to make money is “universal” to currencies or intraday order-flow, rather than an idiosyncrasy of EURUSD or even a fluke in the EURUSD data, though failure on any other currency pair is not necessarily an indictment of this pattern system.

So let’s test out the identical approach on USDCAD, AUDUSD, USDJPY and GBPUSD. These tend to be the currencies which are useful for intraday trading.

So for four out of five currency pairs it works. Not too bad. We can also see from the P&L curves that the performance is diversified enough that when one pair goes through a rough patch, the other performs.

And for GBPUSD at least it’s only flat, and not a straight line down.

But remember, we have only considered the short side up to now!

Just to recap the trading rules for this setup:

In the next post we’ll take a look at the short side. We’ll follow up with looking at combining long and short systems across currency pairs. Afterwards we’ll look at a Linda Rashke’s Turtle Soup alternative, in which we fade the breakout signals, and see what happens then.

This indicator will average the bid / ask spread over the last N ticks. The purpose is to be able to monitor the behavior of the currency pair during fast markets, such as occur before and during news announcements. It’s useful for indicating times of increased danger, and can be used as a possible flag to square positions. The parameters are:

For a lot of people day trading represents the attainment of their trading prowess.  However, you need markets to move to capture profit, especially if you have to cross the bid/ask spread.  It therefore makes sense to trade only during those times in which you have a range-expansion. The indicator Range.mq4 measures exactly that.  If you place it on a 1M (minutely) chart, and set its LookBack period to 15 (that is the last 15 minutes), the indicator will show you the height of the range of … END_OF_DOCUMENT_TOKEN_TO_BE_REPLACED

It’s useful to be able to add a trailing stop to your trades.  Given I never got my head around the MT4 functionality I wrote this small EA, which does the job.  Place it on top of the currency chart and give in the number of pips by which it should trail your trades. You need to put it on currency charts for which you have trades.  So if you have USDJPY trades put the EA on an USDJPY chart. This EA will not trail stops for trades that have a non-zero magic number.  So if you have trad… END_OF_DOCUMENT_TOKEN_TO_BE_REPLACED

This is the second article in the series of trading the Bullish and Bearish Engulfing candle stick patterns. Following on from Part I, we will actually perform some backtests using the results we found in Part I. In Part I, we split up the analysis for long and short trades separately. Here we will keep to this approach. The justification is that there need be no symmetry between the long & short approach. This is especially true for equity systems, where bear markets have distinct dynamics f… END_OF_DOCUMENT_TOKEN_TO_BE_REPLACED

Taking Control of Your Trading Numbers – that means actually being able to replicate the results that others produce.  It’s the only way to be sure that you know what’s going on. Well, many people got back after last week’s article asking about the details of the calculations as well as about some of the more technical jargon:

This XLS accompanies my guest article on RectitudeMarket.com describing the performance of short option strategies on EURUSD. It includes the relevant formulas and data so that you can replicate the results or apply them to your own option strategies.

Following on in the series of Market Dynamics the NFPs presented a great opportunity to take a closer look at what happens during important news events. I’ve learned my lesson by now: don’t trade during news events. And this is especially true of stop orders in these situations. Price will just hop straight through. When it does the fill is awful, and the worst part, as happened on Friday: it reverts very quickly hitting any protective stops. The outcome? You book losses which could… END_OF_DOCUMENT_TOKEN_TO_BE_REPLACED

Mean Reversion trading works for equities; and currencies. We saw in the last article how combining two simple ideas for equities produced a stable system over the last 30 years. Can we repeat a similar analysis for currencies? Yes!  However, be warned.  Currency trading is a different magnitude of difficulty to equity trading.   Currency traders have had a real tough time since 2008 (take a look at the BTOP Barclay Hedge Currency Trader Index). As always it depends which pond yo… END_OF_DOCUMENT_TOKEN_TO_BE_REPLACED