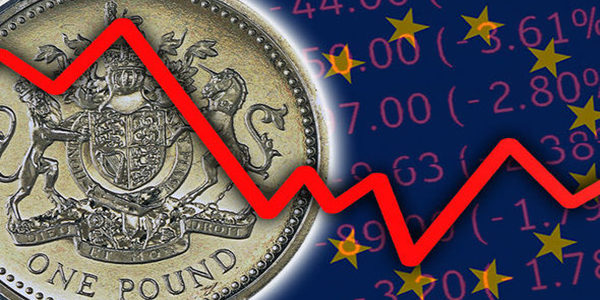 I’ve been asked lots of questions as to how to determine the next moves in GBPUSD.

There have been many arguments for a bottoming out at the current levels, as well as for a continuation given the strength of the downward move experienced post Brexit.

In this article I’ll try to get a handle on possible outcomes, by looking at some fundamental indicators and see where they point to for sterling over the next couple of months.

The longer term perspective will be more difficult to gauge, since we are still in a state of flux, as long as the political situation hasn’t been clarified.  By that I mean the particular details around trade, and how future goods flows will be negotiated between the UK and its future trade partners.

In this article we will start out by analysing domestic output and follow up next week with other economic factors.

But first let’s take a look at Sterling vs the US Dollar over the last 60 years:

There are some interesting conclusions to be drawn here.  At first sight we can definitely identify a long term range, which has included equal or more violent moves than the current Brexit vote.  As you can clearly see GBP indeed has broken through and attained multi-decade lows post the Brexit announcement.  The headlines were full of this.

However, what happens if we look at GPB versus a basket of currencies; n particular against the G9 currencies (USD, EUR, JPY, CHF, CAD, AUD, NZD, SEK, NOK).

This tells a slightly different story.  The “multi-decade” range had been pierced shortly after the GFC, especially after the strong carry-unwind trade driven by the high interest rates in the UK.  It’s also interesting to note that all the gains throughout 2013/14 were completely wiped out once the referendum came on the table.

In some sense this tells us that the underlying economic conditions in the UK, are much more endemic, and not necessarily all of a sudden a result of Brexit.  They are the result of structural conditions that have been built up for years, in which Brexit acted only as a catalyst.  The current account deficit is an oft quoted indicator for that, and we’ll address that next week.

If you are technically inclined it’s very interesting to note that the previous level of 4.5 became strong resistance after 2008, and was also the level at which the pound recovery stalled.

The question of course is now how to get a fundamental handle on these movements.

We’ll approach it from the domestic output angle.  On the domestic front, the PMI numbers tend to be popular, as they are a forward looking survey of the businesses within the country.  Certainly many equity investors scour them to identify strengths and weaknesses within various sectors.

So in this instance we’ll compare the PMI numbers month-on-month and use these monthly changes as an indicator for purchasing or selling the pound.  If the PMI increases we buy the pound on the close of the day of the announcement, if it decreases we sell the pound.  Note, that the specific PMI figure I chose was the Services PMI, as the services sector for the UK is far more relevant than the Construction or Manufacturing sector.

The strategy is very simple.  Of course one hang-up is always the data.  I’ve made available on my site a nifty little Python script, which will enable you to download a whole host of economic releases (with time stamps) going back to 2007.  The great thing is that this information is not only incredibly valuable, but also utterly free, courtesy of our friends at ForexFactory.

The next question is how to trade the GBP.  In this particular example we’ll actually go for GBP against an equally weighted basket of currencies as in the chart above.

The rationale here is that we’ll get a smoother P&L profile, and capture a more diverse flow of money into sterling.

So without further ado, here are the results:

There is one very remarkable event here, and that is Brexit.  You see, the PMI number for June was strong, and that no doubt against the backdrop of most people’s complacency that the Bremain camp would win.  Buying GBP into such an event is madness, and this is a good example of why manual system intervention in times of extraordinary events is needed.  Simply stay out!

Furthermore the July PMI had been surveyed prior to the election event as well.  It was only the ad-hoc 22nd July number, which dropped off a cliff, that indicated the concern that followed Brexit, and the pessimism that set in.  Playing a bit of Harry-hindsight and removing that outlier leads to:

which gives a tidy Sharpe Ratio of 0.5 over the 9 year period.  Nothing to be sniffed at, if you include it as part of an overall portfolio

So how do we see GBP over the short term?  Given the current continued decline in PMI numbers, and the most recent drop, it’s most likely that the trend will continue to the downside.  And most likely get a kicker from the Article 50 catalyst once it’s triggered.  That is of course disregarding the conspiracy theory camp, which claims it will never be triggered!

I urge you to give this strategy a shot with the other currencies and their respective PMI figures.  As I said above you can get the data by downloading it from ForexFactory using this script I’ve put in the Forex Tools section.

Next week we’ll follow up with some more fundamental economic indicators, and find surprising results in unexpected quarters, so stay tuned!